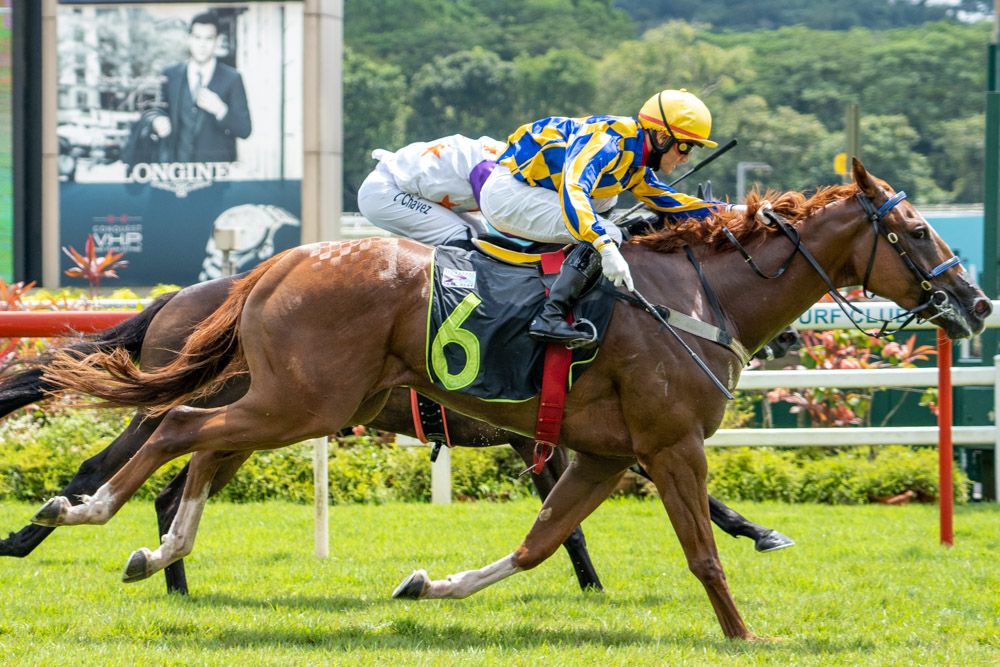 ‘Hothead’ Dancing Tycoon showed he was on the right track after he posted a determined first win in the $20,000 Open Maiden race over 1200m on Sunday.

Third to War Commander on debut, Stephen Gray’s new syndicated horse was well supported ($11 favourite) and had only Blazing Kid (Oscar Chavez) to overcome when he was presented by in-form jockey Wong Chin Chuen at the 400m.

After a hard-fought slog to the line, Dancing Tycoon, on the outside, gained the ascendancy to score by a neck from Blazing Kid, who, with a record now reading two seconds from as many starts, shouldn’t take long to open his account.

Anara (Louis-Philippe Beuzelin) ran third another two lengths away. The winning time was 1min 9.87secs for the 1200m race on the Long Course.

Gray said the Written Tycoon four-year-old has pleasantly surprised him given how he had not been the easiest commodity to train.

“He’s a pretty hyperactive horse and he’s done a very good job to come through and win second-up,” said the New Zealander.

“Jimmy (Wong) rides him every day, and helps us a lot with this horse, and other horses. He trialled the horse as well, he does the hard yards and he will ride Sure Will Do as well next week.

“He gave this horse a beautiful ride today.”

The former two-time Singapore champion apprentice jockey, who was aboard at Dancing Tycoon’s Kanji debut as well, said the penny had not fully dropped, but there was definitely a motor there.

“He gets quite excited in the parade ring, but on the track, he’s a horse who knows what to do,” said the Malaysian hoop.

“He jumped out very well and he sat off the speed. In the straight, I still had plenty in hand underneath me.

“He took the gaps very well, but when there was no horse in front, he got a bit lost. I kept his mind focused and he got the job done nicely.

“This horse has potential, but there’s still more improvement once he learns how to focus better.”

Since returning from his New Zealand holidays, Gray was obviously rapt he was greeting his first 2022 winner (assistant-trainer Lisa O’Shea deputised for him at the yard’s first six winners), but it still came with a bittersweet taste.

“It’s a new syndicate I put together. A lot of them are new first-time owners,” he said.

“There are also some old owners from before, like a couple of US boys who used to race with me years ago, and decided to join me again.

“It’s a shame all these owners still can’t come to the races, but let’s hope they still have a lot of fun with this horse.

“I’ll find a Novice race for him and then give him a freshen-up, so he can mature both physically and mentally.”

Dancing Tycoon races in Gray’s iconic Copperbelt blue and yellow checks, which were on show at Caulfield in the Group 2 Rubiton Stakes (1100m) on Saturday, but unfortunately, Oxley Road could only run second to favourite Marine One.

“He went well, even if there was some controversy about the race,” said Gray.

“(Trainer) Peter (Moody) was upset they watered the track in the morning. My horse also had more weight – 59kgs – while the winner had only 54kgs, but he still ran well.”