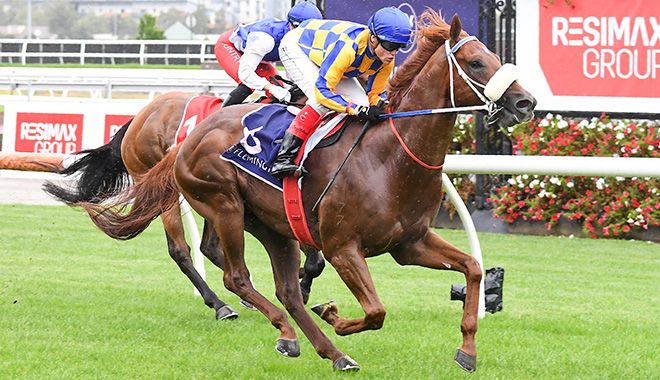 Peter Moody will be doing quite a bit of weather watching over the next few weeks as he tries to plot a path this spring for Oxley Road to find himself in a suitable group 1 sprint.

The Oakleigh Plate placegetter will run this Saturday in the G3 Bletchingly Stakes (1200m) at Caulfield if he can avoid wet ground – something that Moody is acutely aware of when planning for the horse.

“He’s a G3 winner and we are just trying to build his resume and not waste runs and I wasted one the other day (Monash Stakes) wondering about the wet again. So, we’ve just got to wait for dry tracks.”

Moody said there are good options for the Exceed And Excel entire as he builds towards a shot at a spring G1.

“There is basically a race on every program for him and we’ve just got to pick our mark,” he said. “He could have a couple of runs early and have a freshen for those back-end sprints.

“So, do we look at a Moir or something like that? I might take him to the Carlyon (Stakes over 1000 metres) in about four weeks at The Valley because he hasn’t run at the The Valley and I’d like to see him perform there.”

Just as with G2 winner Oxley Road, Moody also has group 1 ambitions for his soon-to-be four-year-old G2 winner Lightsaber, who is coming off an autumn campaign that includes a second placing in the G1 Australian Guineas (1600m) behind Hitotsu.

“He’s a couple of weeks off a trial so looking at the back end of August there and build him through those six and seven furlong race up to a mile,” he said.

“Is he going to be a Toorak horse? – that would be nice to think.

“It’s the same for him as with Oxley Road. “He’s a G2 winner (VRC Sires’ Produce Stakes) and we are building a resume for him and he’s another who needs dry ground.”

Moody reported that while Incentivise was out in the paddock, his other major Cups chance Spanish Mission was progressing well in his preparation.

“He’ll have a pop-out of the barriers on Tuesday and then he’ll get another one in a few weeks’ time with a race like the Heatherlie (1700m at Caulfield) or Makybe (Diva Stakes, 1600m at Flemington) to start him off.”

As for Incentivise: “He’s in good order but he’s at home running around in the mud having fun so we look to next autumn with him.”